going to link to this post by @bladekindeyewear instead of reblogging because it's good, but long af and only one little part of it really relevant to what i'm rambling about here, but anyway.

to quote the little part

There's the issue of Vriska, who used the cueball for the longest time but was clearly exercising her role… however, do keep in mind that when the cueball exploded, (1) she lost some of her sight, (2) her luck flushed down the drain, and (3) her psyche and attitude declined to only facilitate and perpetuate this pessimistic unimportance she felt, just as Kanaya pointed out. Vriska wasn’t ghosting inversion, but it certainly took her from full exercise of her role down to a more diminished and unrealized low-point.

so i’m wondering if perhaps she might have undergone (however breifly) something like a genuine inversion after the explosion.  namely….

during the mobius double reacharound ([s] make her pay) itself, she blinds terezi.  which itself seems like it’s dipping into the powers of void itself - the destruction or obfuscation of information. and moreover, this exploitation ends up benefitting the team as a whole, much of terezi’s abilities and unique viewpoint comes from her blindness in some form or another, to the point that when terezi gets her eyes healed she becomes close to useless and very personally broken up.  also, during this vriska is acting surprisingly passively, she isn’t applying these effects to herself, but to other members of her team.

also, something we see a lot although it’s never spelled out, but we see a lot of knights working with alternate versions of themselves and passing tasks through multiple versions of themselves to get tasks done.  whether that’s dave physically passing things between is physical time travelling selves, or karkat passing information and such through his past and future selves on his bulletin boards.  although vriska had been known previously to involve mind-controlled others in her activites before,  the number of connections involved in the double mobius reacharound is extraordinary even for her, she creates a veritable chain of temporary “vriskas” and passes orders own them to accomplish this information-blocking goal.

for the (brief) duration of the DMRA in [s] make her pay, vriska may be temporarily operating much like a Knight of Void.

ok, so as part of a previous post, i made a little bit of a small comment about knights that now i’m thinking a bit more about.  i don’t know how it fits into broader ideas or themes but it seems to be a thing that happens.  knights tend to work by passing things they need to do their work between alternate versions of themselves. for example, dave works by passing physical objects (typically with time properties like caledscratch or the time tables) between himselves via the medium of time travel.  karkat uses trollian, a internet social communication application, to pass bonds and allies between himselves.  most notably, he passes a (very) friendly john back to himself almost at the beginning point in their communication, where he wouldn’t really have a lot of reason to be friendly, but would be very useful that way.

unfortunately we on’t get enough of seeing how latula or redglare work for me to make much judgement on them.

ok…. no, this is interesting.

so when we get the “hi karkat” response from john, FCG has just done the equivalent of when Dave sprite dumped that whole pile of legendary swords and other advanced gear for Dave, right in his lap.  Just like that gift brought back from future/doomed timeline dave allowed past/current dave to have access to v important Sword Shit early on, well before he was supposed to….  through his absolutely stupid “trolling you backwards in time” bullshit, future karkat managed to pass back to past karkat an ally in john from pretty much the very beginning, who already thought karkat was basically funny as shit *  and very willing to cooperate, so that karkat could hit the ground running. 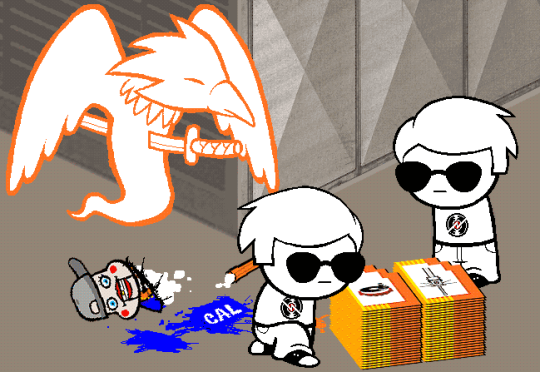 like karkat’s trans timeline bulletin boards, one of their important functions might be to pass on information….  but actually, in execution they’re bad at that, hillariously so.  they get mired down in squabbling so information gets straigt up lost, and even when stuff does get through…. half the time people just don’t believe it, like with the jade robot thing, or karkat thinking sollux is jus faking/rping dying for sarcasm, or eridan thinking karkat is just hate flirting with him when he’s pissed off at him for harming feferi in the future….

so on a light/information level - almost a total bust. but what about on a blood level?

but alliances? that’s a different story.

and on a slightly different but related subject

so a while back i saw something that said that knights/pages were passive/active respectively, and that they were tied to serving/getting served.  which i really liked it, and it seemed to jive with what i’ve seen.  but recently i’ve seen @bladekindeyewear ‘s interpretation ** of them “exploiting” their aspect  and making it do in tight circumstances, and it seems very well thought out and good.  but i still can’t shake the feeling that knights make a lot of sense as passive and pages as active.  but i just thought of something,  what if one aspect of knight’s versatile nature is if they find themselves alone, without an appropriate and useful teammate, they can count alternate versions of themselves as “other teammates”  to invite/channel their aspect towards?  “oh, i don’t have a teammate around to “exploit for the benefit of”??  fine!  this other version of me?  that’s future me! see totally different!!” *is quickly putting some funny glasses on their future self and drawing a mustache on their face*

and come to think of it, there might be an explanation to why i thought the “serving” thing looked reasonable too.  like, the archetypal butler/cook/lady’s maid is someone who can make do ingeniously with little.  think jeeves.  and even when i look back through historical documents of people with their servants,  when there’s praise, it’s often for making things happen cleverly with little “making a feast out of want” etc.  so i think the two concepts may be connected.

*  (and basically heart eyes for him, which must have been frustrating as hell for spades-y karkat lol)

** one of my fav quotes from that convo:

- Give a Knight his sword, and he’ll cut down foes, mend armor, scale walls, unlock doors, perform alchemy, fell drawbridges, dice vegetables and stir stew, jumpstart cars, unclog his plumbing, clog an enemy’s plumbing, and perform circus entertainment… all with the same, solitary, unchanged sword. And when it finally breaks in half, he’ll use the hilt as a dagger and the tip as a doorstop.

To learn more HTML/CSS, check out these tutorials!